My Last Mile – StoryCorps
Support StoryCorps and help preserve the stories of our time in America Donate
story
2:49
Subscribe Support
My Last Mile
0:00 / 0:00

On October 1, 2007, an ex-convict named Billy McCune—one of the most important subjects in the history of documentary photography—died in a half-way house in Kansas City, Missouri. He was 79 years old.

McCune, who was mentally ill, was convicted of rape and sentenced to die in the electric chair in 1950. A song he wrote on death row caught the ear of the governor, who commuted his sentence to life in prison. It was there, four decades ago, that McCune met a young documentary photographer named Danny Lyon. Lyon had been granted unprecedented access to photograph inside the Texas prison system. He published his photos in the seminal 1971 book, Conversations With the Dead.

Over the course of the project, Danny Lyon got to know Billy McCune, who had also become an artist in the penitentiary. Lyon included so many of McCune’s drawings in Conversations With the Dead that he subtitled the book “Photographs of Prison Life With the Letters and Drawings of Billy McCune #12-20-54.”

While Lyon’s prison photos are today legendary, what’s not know is that he also made reel-to-reel audio recordings of his conversations with Billy McCune in prison. Never before heard, these tapes are an extraordinary artifact—providing a rare glimpse inside the Texas prisons of the 1960s, and documenting Lyon’s historic partnership with the late Billy McCune. Photographer Danny Lyon tells us the story. 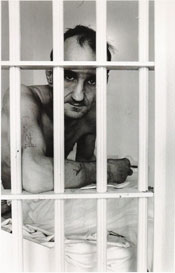 This documentary comes from Sound Portraits Productions, a mission-driven independent production company that was created by Dave Isay in 1994. Sound Portraits was the predecessor to StoryCorps and was dedicated to telling stories that brought neglected American voices to a national audience.

BILLY MCCUNE: Is it on?

LYON: First time I saw McCune was in what’s called the nut row—he was inside his cell, his fingers were completely stained with tobacco.

MCCUNE: Let me throw my cigarette away.

LYON: McCune was famous inside the prison system. He had survived death row and he had written a song called ”My Last Mile” about his experiences facing the electric chair.

MCCUNE: This song was composed on the death row in 1951, by Billy McCune.

(Song: ”When they put those straps on me, I know I must go. They can kill my body but cannot kill my soul…)

LYON: He had formed a good friendship with a warden, Warden Sublet. It was Sublet who drove through the night on a rainy night just before execution and reached the governor of Texas and was able to persuade him to adjudicate his sentence and change it to life-in-prison.

(Song: ”When they put that current to me I know I can’t smile but I want that Lord with me as I walk my last mile.)

LYON: Yeah that was good

LYON: That was good…

LYON: The recording was the only one I made in the Texas prison. And in the process of it he started to tell me his whole life story.

LYON: Once the tape recorder was on it was like he was on the radio and was addressing a huge audience like it was a live broadcast from inside his cell.

MCCUNE: People have often asked, ’What is a prison cell like?’ There is a door that is opened by a crank up in front. On the left or right is an iron bunk with a mattress and sheet and a pillow and against the wall is a toilet—or a commode.

LYON: I guess there was so much I wanted to tell about the prison.

MCCUNE: I am entirely alone and I have always been alone.

LYON: Suddenly Billy’s words were a way to express the horror of this place much better than I could.

MCCUNE: I receive no Christmas cards from any of my relatives. No letters or nothing. No brothers no sisters no mothers no daddies. I receive no visits in the last 16 years. So you out there who are wandering along life’s road, please take my warning and try to change your way. Out there you can do many things—dance, skate, go to football games, picture shows, church, anywheres you want. You will not be thrown into a bed of rattlesnakes.

LYON: This is just one guy speaking to us—one voice. There’s a little God in everybody and that’s what you’re listening to.

MCCUNE: Any man confined to a cell learns to do various things, as I have done. He has learned to read, he sings to his selfs. He tries to write a little poetry and poems. And try to rehabilitate ourself, if such a thing is possible.

LYON: He needed a Bic refill to do any writing so I got him those and I got him some paper and some art materials. The result was this tremendous amount of artwork came out of this guy. It was like a flame from hell.

At one point he said to me, ’You know, I wrote my life story. But I threw it out.’ And I was just crushed. And I looked at him and he said, ’Well I can just write it again.’ And he wrote it again.

MCCUNE: I hope this brief little story that I have told to you will give you an idea what a convict or inmate and how he lives in prison. Thank you very much.

LYON: I originally just had the run of the place really. As time went on, they started withdrawing the hospitality mat. So I had to go to Billy and say goodbye.

MCCUNE: I’m pretty sure that I will never again go out of these prison walls alive. But I will have faith and I will have hope in the goodness and the humanism of the human race. Goodbye and may God bless you. My name is Billy McCune.

LYON: So, I left Texas I went back to New York, I finished doing the book and it was published—Conversations With The Dead—they never showed a copy to McCune. And then, two years after that I was able to get Billy’s book published. That was called The Autobiography of Billy McCune.

And then about 5 years after that they let him go. About 20 years went by, and I got a letter in the mail and he was living in a city in the Midwest and he wanted to hear from me. So I went out to see him.

LYON: Well it’s good to see you—can you see me?

LYON: Seeing Billy McCune was an absolutely amazing experience. He’s frail. He has his own room—it’s government-subsidized housing.

Billy defied everybody. He did these drawings that people will probably fight over someday and he ended up in a book—there’s a portrait of him in the same book that has Braque and Picasso and Jackson Pollock in it.

This is a book I brought. They’re pictures of artists—
This is Picasso.

MCCUNE: Picasso, yeah I heard of him. I studied some of them artists when I was locked up in isolation.

LYON: And this is Jackson Pollock.

LYON: Billy they put your picture in this book.

MCCUNE: Well which one?

MCCUNE: Yeah I can see the bars and uh…

LYON: So they put you in here with all these other—

MCCUNE: I did the best I could with what I had to do with.

LYON: They say Billy McCune born 1928. And then they say that we met, 1968. Danny Lyon met Billy McCune, an inmate serving a life sentence…Lyon and McCune formed a bond that led to a unique artistic collaboration. Think that’s right?

MCCUNE: I pick up a little here and there…

LYON: We spent a day riding around and at the end of the day he got out and he had this used corduroy jacket he had put on and he walked by himself over to the door and he opened it and I realized, I had only seen this guy in prison and there he was going into his own house, with his own key, and he was free.

MCCUNE: I just live live from day to day.

LYON: Billy, when we first met we made a tape recording together.

MCCUNE: Yeah. That’s how you got to me in prison and come up with ”My Last Mile”

LYON: Can you remember those lyrics?

MCCUNE: I sure do

LYON: Well why don’t we hear those?

MCCUNE: Allright, but I’m not going to try to sing: I’ve often wondered when I was a boy why I was smart and killed all of my joy…