Sada Jackson became a mother in 2016, shortly after losing her own mother, Ileana Watson, to breast cancer. 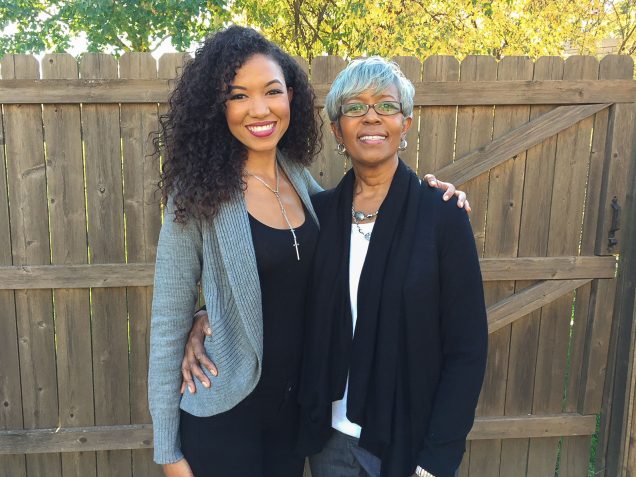 Years later, Sada was still longing for all the moments they’d never get to share — and thinking about all the questions she never got to ask. So in 2018, she sat down at StoryCorps in Kansas City, Missouri with her mom’s best friend, Angela Morehead-Mugita, to get to know more about who her mom was. 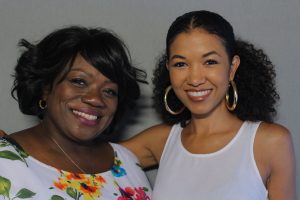 Photo: Sada Jackson (right) at StoryCorps in Kansas City, MO in 2018 with her late-mother’s best friend, Angela Morehead-Mugita. By Savannah Winchester for StoryCorps.

Sada is now a mom of two, and she teaches them about their grandmother whenever she can. She says that all these years later, she can still feel her mom watching after her and her family.

This season we’ve been bringing you short updates every other week from some of our favorite participants.. who continue to show us that it’s possible to move forward…even after going through something really difficult…

In this episode, we’re going to hear from Sada Jackson…who lost her mom, Ileana Watson, to breast cancer in 2016.

Not long after that, Sada became a mom herself.

When she came to StoryCorps, she sat down with her mom’s best friend, Angela Morehead-Mugita…

Sada Jackson (SJ): I just thought it would be really cool to sit with one of her friends. Like, how often do you get to do that, to sit with your parents’ friends and just ask questions? And they don’t get to jump in and say, “Don’t tell her that!”

Angela Morehead-Mugita (AM): Right, “Don’t tell her what I said!”

SJ: I want to know more about my mom as a woman because I only knew her as “mom.”

AM: The part that most children don’t see from their parents is the vulnerability. I think for the both of us we became vaults for each other. We call them vaults—she’s like “Okay, I need a vault moment.” As a matter of fact, she helped me when I had my son. I remember calling her the day I came home with Christopher.

AM: I sat on my couch and I had all of these beautiful things from my baby shower. And I’m just bawling; I said, “Ilena what am I supposed to do now?” And she was so clear. She’s like, “You’re gonna hold your baby. All that stuff in the living room is gonna stay right there until you get yourself together.” So that was the one thing about Ileana: she would never let me lose it.

SJ: I got emotional when you were telling the story because losing my mom to breast cancer when I was entering my eighth month of pregnancy and not having that chance to call her when I got home, it still bothers me. But at the same time, I heard her say, “Don’t you be no sad mama for my grandbaby.” [Laughs]

SJ: Yeah. And I’m feeling that. I’m feeling, like, her encouraging me saying, “Now you’re the mother. You’re a woman.”

SJ:  And when my baby looks up to me and I’m singing certain lullabies that she sang to me, I’ll do, like, a little run and be like, “That was a mom run.”

AM: That’s your mother! [Laughs] Yep. I’m watching every seed that your mother sowed in life, manifest in you — in your son, in your marriage. And I remember when my mother passed away and she came to the funeral and she hugged me and she whispered in my ear and she said, “You got this. You will not break down. You will walk in there and be the legacy that your mother left you.”

AM: And so I say that to you. You will not lose it. You will not break down. And you will walk in the legacy that your mother left for you.

It’s been a couple years since they recorded that interview…and when we reached out to see how Sada was doing, she told us she can still feel her mom’s presence all around her…

Like when she gave birth to her second child. Because of some complications, she had to have an emergency C section. She was really scared and nervous, but then something kinda cool happened. The doctors came in and told her that her son’s pediatrician’s last name was pronounced just like her mom’s name, Ileana.

…and she told us… in that moment… she knew her family was going to be just fine.

This story was produced by Aisha Turner. It was edited by Kerrie Hillman. It was facilitated by Savannah Winchester. Our Executive Editor is Jasmyn Morris. Our technical director is Jarrett Floyd.

For the StoryCorps podcast I’m Kamilah Kashanie. Catch you next week.

Neil Kramer and his ex-wife, Sophia Lansky, talk about their unique quarantine experience together.

You Can Fall, Just Don't Stay There

In 1993, Los Angeles County firefighter Derek Bart saved a child from a house fire in Santa Clarita, CA. In our last episode of the season, we’ll hear three different perspectives on that night, and how they all intersect nearly 30 years later.

podcast
Finding Where You Fit
18:24

Finding Where You Fit

All season long, we’ve heard from trailblazers at the top of their game in every field. In this episode, we mean that literally. We’ll hear from three different athletes who shook things up on the baseball field and on the basketball court.

podcast
We Go Up Together Or We Go Down Together
16:16

We Go Up Together Or We Go Down Together

On this week’s episode, we’re remembering the final hours of Dr. Martin Luther King Jr’s life through the experiences of some of the people who were there at the time.